It’s the freakin’ weekend! Happy 4th to my American friends. Hope you’re all having a wonderful time.

Me? I’m here, north of the border, relaxing like it was my national holiday. Pretty much the only productive thing I got up to today was running a nice steady 3.5 miles.

Happy to say, I felt pretty well-rested after Thursday’s 10 km tempo run. And thank goodness for that because it was kind of a doozy.

My training plan for running a 4-hour marathon says my pace for tempo runs should be 9:14/mile. Even when I include my warm-up and cool-down in Thursday’s run, I slaughtered that pace.

When it comes to moral support in my running, I’m a darn lucky lady.

I have an amazing husband who tells me regularly how proud he is of my commitment to running — especially on those days when I’d rather do anything but. I have a mom, dad and brother who get up at ungodly hours on Sunday mornings to come watch me race. And I have extended family who always ask about my running and shower me with kind words of admiration.

I guess that’s why it’s particularly jarring for me when I encounter someone of the opposite persuasion: a naysayer.

That’s what happened to me on Thursday. Our regular marathon clinic instructor was out-of-town so we had someone else fill in. We set out on our warm-up and he started asking about our goals.

I mentioned I was aiming for a sub-4:00 marathon this year.

“What did you run your last one in?” he asked.

“What about your last half?”

I mean I get where he’s coming from. I’m familiar with the general notion that your marathon time will be your half-marathon time doubled, plus 10 minutes. I get that maybe it’s not a good idea to set someone up for failure if they’ve set an unrealistic goal.

But what he didn’t get about me is that I’ve been running my butt off. I’ve been working hard on my speed since that last half-marathon. And since my marathon training began, I’ve been consistently meeting and exceeding the prescribed training run paces for a 4-hour marathon.

And he’s gonna waltz into my clinic and tell me my goal isn’t realistic? C’mon!

I gotta thank him though, because after hearing his thoughts I ran the heck out of our tempo miles. I stayed at the front of the pack, pushed hard, told my tired legs to buck up, and ran faster than I knew I could.

Turns out a naysayer can be a good thing after all! For me, it was just the fire I needed lit under my bum to dig deep and find out what I’m really capable of. My dad suggested we invite him to come to my marathon in Toronto! 😉

How do you deal with the naysayers?

What motivates you more: positive supporters or pessimistic naysayers? 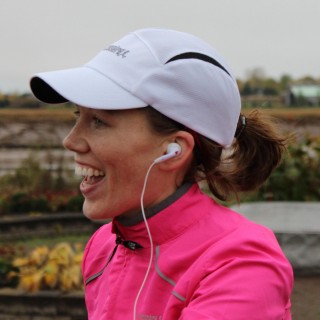